A feast of my imagination resurrected
by prompt on Fridays
​ 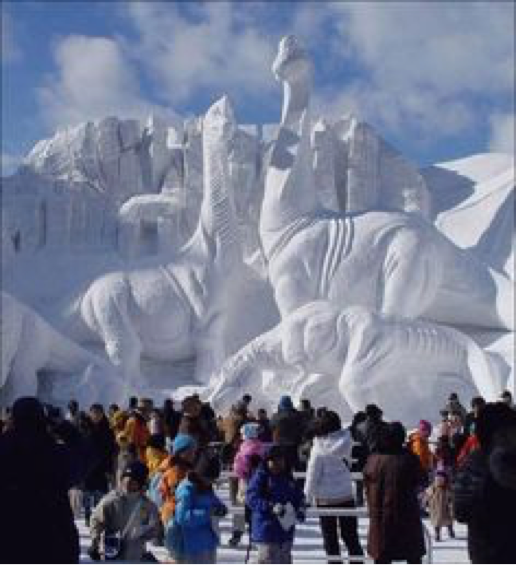 We are an exclusive club of travellers. Our writing fraternity has visited a different exotic venue each winter for the last ten years. We have been to the ends of the earth in search of inspiration. We explore an unusual destination, then write like crazy for a fortnight using our holiday destination as a backdrop.
We decided to holiday this year in Japan, It was Harry, the new guy to our group. who had the idea of visiting Hokkaido, I can clearly remember when he addressed the group at our annual meeting.
“Thanks to the prevailing cold winds from Russia: Hokkaido, Japan’s northernmost and second-largest island usually gets a good dumping of snow. Sapporo, Japan’s fifth largest city, hosts a magical snow festival that attracts over two million people every year in February to see hundreds of snow statues and ice sculptures.”
There was a general positive reaction to this idea.
Jim Trimble the chairman responded with, “Yes, I've heard of this massive unusual event, we ought to get some great inspirati. on from the displays and the atmosphere there.”

Peter Drake our secretary and treasurer looked up from the laptop he had perched in front of him on the table. “Sapporo is within our budget and has some interesting features to visit whilst we are there. I can probably get a good deal if we book early,”

“Any questions, or alternative ideas?” asked the chairman.

Millicent Summers, then asked, “What is the temperature like there in February,?”

The chairman then asked for a show of hands and the decision to visit Sapporo was carried unanimously.

That is the background to how we found ourselves marooned in a luxury hotel in Sapporo, after a freak snowfall had dumped ten inches of snow on this part of the city causing widespread chaos. With devastating snowdrifts piling up bringing delays to all transport, thousands of people were stranded at the airports.

We were called together to be questioned by an officer of the Japanese police investigating the murder of one of our fellow guests, an Australian man who was travelling alone had been found dead in his hotel room with a severe wound to his head.

The investigating officer arrived with two colleagues and began to question all of the hotel guests individually.

The police made an arrest and left with the suspect in handcuffs. We were shocked to discover that Harry, the new guy in our club was under arrest for murder.

Jim Trimble said the evidence was cast iron as the victim had been assaulted with one of the large heavy glass ashtrays that can be found in every room throughout the hotel. The only missing ashtray was from Harry’s room, this was almost incontrovertible evidence.

Millicent was soon on the case, and angrily cornered the night porter and questioned him vigorously, she hated to admit Harry had spent the night with her.


Harry was quickly released; an innocent victim of a planned assassination.